Georgie has been in post for more than thirty years. Born and brought up in Swaffham, Georgie has dedicated her life to caring for others and her role at the Merle Boddy Centre demonstrates this commitment. She is so well known and so highly regarded within the Swaffham community, that she motivates valuable support and gathers generous donations from many local groups and associations. These additional funds are critical to assist the Centre to maintain the level of service, that is then available to those individuals who are less fortunate and seek the support that the Merle Boddy Centre can provide.

James is Chairman of the the registered Charity which runs the centre. He is a passionate supporter of all the wonderful work Georgie and her team carries out and can speak from firsthand experience as his wife, Elizabeth attended there before she had to go into long term care. He is aided by a small team of dedicated Directors whose main aims are to raise funds to keep the Charity solvent and to support the paid staff and volunteers.

Georgie and the Team 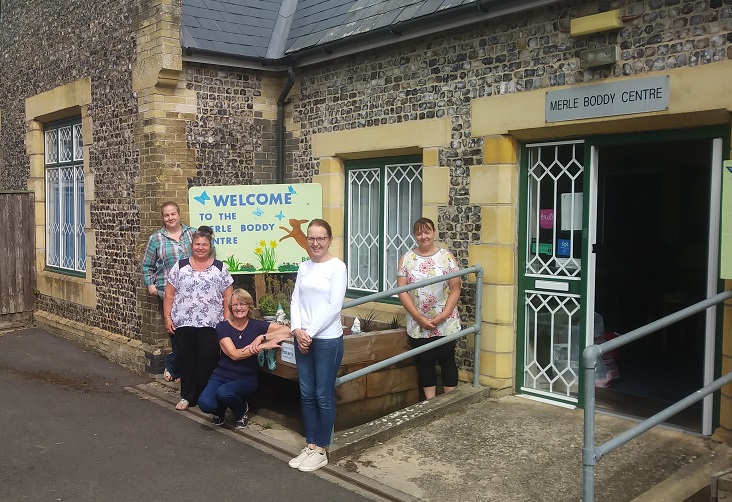 How we got here

We started way back in 1975. As we grew over the next few years we began looking for a permanent home.

In 1988 we moved into the newly restored Railway Station in Swaffham. The Centre was named after Merle Boddy, a prominent Swaffham person, Town Councillor, and former Town Mayor.

With continued growth the decision was taken to become an independent organisation, so, on the 9th August 1994 we became a private limited company, Swaffham & District Mental Health Association Limited.

On 26th October 1995 we became an Independent Registered Charity.

Arrange a taster day at the Merle Boddy Centre on any day. Just call 01760 724527 to make arrangements with the Manager